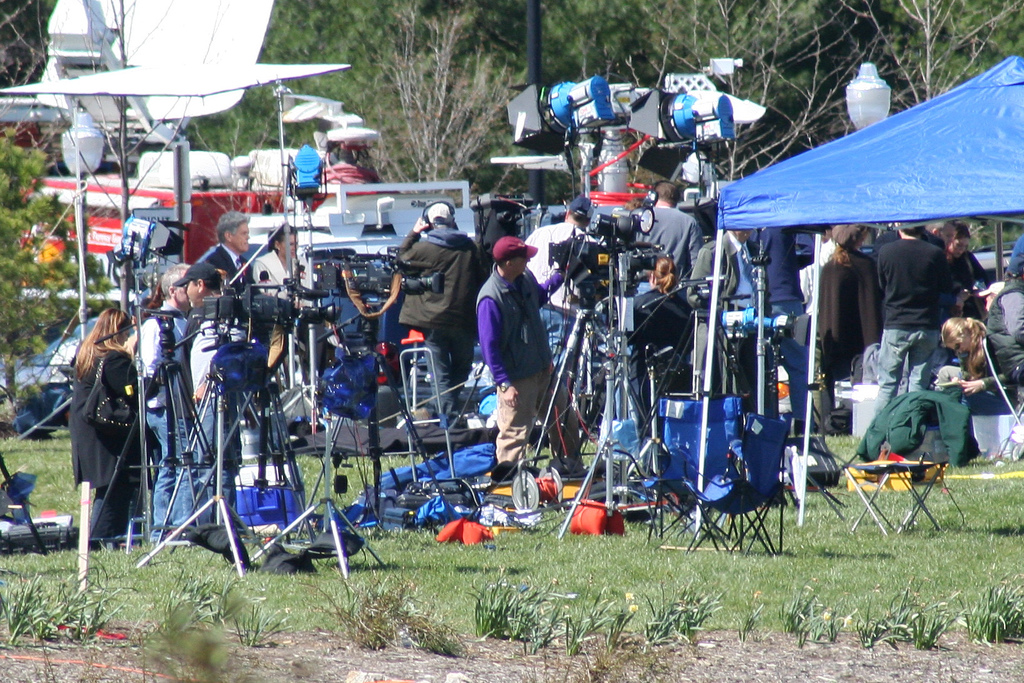 How far should reporters go to get the story?   Being the station with an “exclusive” on a breaking news event is a major win for the whole news team.  But what if getting that  exclusive was obtained through questionable means? Does the public really have a “right to know”? Should landing an interview trump compassion and decency in times of great tragedy?

In Las Vegas this week, local television station KLAS is crying foul over the way one journalist obtained an exclusive on a story.  According to police, NBC freelance producer Shelley Osterloh lied to a slain police officer’s family when she showed up at the door with flowers, letting the police believe she was a friend of the family.  What she was there to do was set up an interview for the Today Show.  CBS TV station KLAS condemned Osterloh with reporter George Knapp doing a fiery editorial denouncing her story-gathering methods.  Las Vegas police have called Osterloh’s behavior, “an underhanded act of subterfuge.”  Osterloh and NBC, however, are denying any wrongdoing, claiming in a written statement:  “At no time did she misrepresent herself; there was unfortunately some confusion during an earlier conversation she had with a police officer, when she was asked for her name but not her affiliation.”  In other words, when she showed up at the door with the flowers, they didn’t ask if she was a journalist and she didn’t offer.  Many feel she should have.  The incident does, however, raise the issue of how far to go to get a story.

In January of 1989,  I was sent to the scene of one of the nation’s first school shootings, at Cleveland elementary, in Stockton, California.  A gunman dressed in camouflage clothing and armed with several weapons opened fire on the grammar school playground he himself had attended, killing 5 and injuring 29, mostly children.  As if that horror was not enough, these were mainly the children of southeast Asian immigrants who had fled to the United States for safety.   I was working at the PBS flagship KQED-TV in San Francisco and was dispatched by the MacNeil-Lehrer Newshour to cover the story the following day.

When we pulled around the corner the next morning, the scene at the school was a circus.  Satellite technology now enabled stations from coast to coast to have a live presence during breaking news events which meant stations from hundreds of miles away could now send crews and have their own reporters on the scene.  Cable TV had just taken off, swelling the ranks of those showing up to cover the story. News had become a 24-hour beast with a huge appetite and that day, it was very hungry.

Waiting at the school were hundreds of ambitious reporters wanting to make the boss happy back at the newsroom.  Scores of cameras were set up side by side for live shots; satellite trucks were lined up down the block, their masts raised to the sky.   As the crowd grew with radio, newspaper, television and cable crews, it began to trigger behaviors by some of the journalists that were out of the norm.  The event became the backdrop for a reunion for crews who hadn’t seen each other since the last huge story – there was hugging and laughter; fast food wrappers littered the ground.  Someone had actually placed a used coffee cup on the school sign, which was draped with flowers.  When the first school buses arrived, the situation turned into a feeding frenzy as several reporters chased children and their parents down the street.  Some were going door to door looking for witnesses to the killings, hoping for a major “get”, as exclusives are sometimes called.  My crew and I watched, horrified, along with a small group of other reporters, as so many of our colleagues engaged in the worst kind of pack journalism, a competitive gang-bang of unbridled rivalry, where they were rudely demanding interviews from people by proclaiming the “public has a right to know,” and showing complete insensitivity to the situation.  The officials at the school, unaccustomed to media attention, were frazzled and overwhelmed trying to keep up with the unending demands for one-on-one interviews, not realizing they could schedule updates and address everyone as a group on their timetable, not ours.

The story I submitted to MacNeil-Leher was kicked back – I was told they did not send me there to cover the role of the media, even though the media presence at the event became part of the tragedy. They made me re-cut it to delete the scenes of the reporters chasing the children.  Here is the sanitized report they ran instead:

But my observations that day did not fade in time, in fact, my discomfort in watching so many of my colleagues behave so poorly at big news events grew.  Ten years later, in April of 1999,  teenagers Eric Harris and Dylan Klebold unleashed an all-out assault at Columbine High School in Littleton, Colorado, slaughtering twelve students, one teacher, and injuring 21 more before killing themselves.  By then,  I had seen enough coverage of this kind of violence to predict what would come next.  Here’s a piece I wrote for American Journalism Review, entitled “Beyond Total Immersion” which attempts to explain what happens to many journalists when the heat of the story overcomes their conscience when trying to get that coveted “exclusive.”

Today, with workplace violence and school shootings becoming so sadly routine, the media knows the drill well.  Most parachute in for some quick coverage, do what they need to do to get the story and then leave, onto the next siren call of breaking news.  There is little time for reflection; yesterday’s news is gone.  But what we leave behind us is important. Every news organization could use an occasional assessment of how well it’s performing its public trust, especially after a big story.  No matter how anyone tries to  justify it, the “public’s right to know” doesn’t include being dishonest, manipulative and overly intrusive in order to get the story.  Otherwise, regardless of whether we show up by banging on doors or with flowers in hand, we are just one more assault on communities and families trying to come to grips with heartbreaking loss.

One Response to “Getting the “Get””